Forget about Kayne West, the jackass is right under your nose. 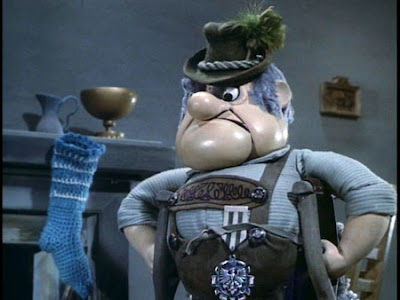 (Burgermeister Meisterburger- direct quote : "You brats are under arrest.")

(I lifted this news story from the Philidelphia Inquirer)
Did you hear about the Camden cop whose disabled son wasn't allowed to pass through airport security unless he took off his leg braces?

Unfortunately, it's no joke. This happened to Bob Thomas, a 53-year-old officer in Camden's emergency crime suppression team, who was flying to Orlando in March with his wife, Leona, and their son, Ryan.
Ryan was taking his first flight, to Walt Disney World, for his fourth birthday
The boy is developmentally delayed, one of the effects of being born 16 weeks prematurely. His ankles are malformed and his legs have low muscle tone. In March he was just starting to walk.

Mid-morning on March 19, his parents wheeled his stroller to the TSA security point, a couple of hours before their Southwest Airlines flight was to depart.

The boy's father broke down the stroller and put it on the conveyor belt as Leona Thomas walked Ryan through the metal detector.
The alarm went off.
The screener told them to take off the boy's braces.
The Thomases were dumbfounded. "I told them he can't walk without them on his own," Bob Thomas said.

"He said, 'He'll need to take them off.' "
Ryan's mother offered to walk him through the detector after they removed the braces, which are custom-made of metal and hardened plastic.
No, the screener replied. The boy had to walk on his own.

Big sis has an attitude problem.

Labels: Dear God get me outta here but pick someone else first, People who scare me