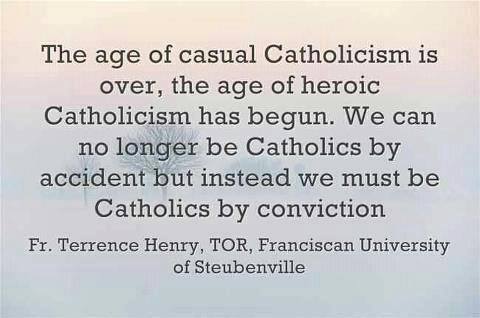 The really sad thing is that not only will the world want to devour us but so will a majority of our Catholic brethren, and because they know us and understand us, they will hurt us the most. They'll be some of our family members, people we love. We can see the groundwork being laid on social medias with the snide remarks I get from lukewarm or worse yet, adversarial Catholics who want to argue about every doctrine, and comment coming from the Vatican unless of course it fits their agenda. They are fueled by their hatred because Catholic authority is inflexible, which of course is correct and just. For church teaching to accommodate the winds of change would make it a fraudulent religion. Most of these young to nearing middle age adults act entitled or at the very least were made to feel special as children and of course, they were special because their parents only had one or two of them to throw all of their resources, financial and emotional into. This is where children learned about compromising and negotiating with authority. Their parents world revolved around the child, but that too was a fallacy because those kids were raised predominately by daycare, television, computers and liberal school systems. Authority figures make them feel uncomfortable and do you know what they will do with regulations or people who make them feel  uncomfortable? They will use legalism as they negotiate and legislate against people who still believe in the Holy Catholic church, out of existence as they had successfully done in 1973.
Posted by belinda at 4:56 PM

Labels: "Crazy"- isn't a new idea, Halloween, It's just not that complicated.