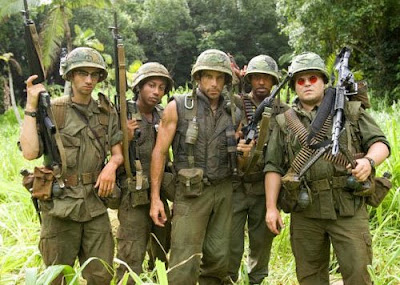 Someone gave me a copy of "Tropic Thunder" to view over this past weekend. First off I asked him "TWICE"-"do people in this movie say God's name in vain?" His reply was clearly "no." Oh sure it had a bunch of cussing, but I am use to that after having been raised by a couple of sailors on shore leave. I am disappointed in my video lenders inability to recognize sin , even apparently when it slaps him in the face - many times.

I am also disappointed in you boys that made this movie. Every other sentence was either "God's" name in vain or "Christs" . I could only watch about 7 minutes of it, and even with that much it made me ashamed of myself . I cringed every time it was said, I kept thinking okay in a minute I will see that this movie is really great just like everyone had said it was , but it never happened.

I am worried, and anxious, about the future of a people (audience) that are willing to sit through this gory, blasphemous , profane movie. It was also strange how disrespectful they were towards human flesh. Even though it was fake. Did you know that the Jewish people have such a profound respect for the bodies of the dead that when ever there is some sort of a bombing or a tragedy their people are required to find all of the pieces of the person before burial?

While you people watch this stuff , and while still others like you are producing, and manufacturing this crap , Rome burns, and your fueling the fires. ALL OF YOU. Millions of you people are blazing your way to hell laughing all of the way .

Poor "Christ" all the while standing there humiliated , yet waiting to save you.

*On one other hand, Jewish law prohibits desecration of a dead body (nivul hamet). A dead person's body, since it once housed the holy soul, is to be treated with the utmost respect. Every part of the body must be buried -- which is why you see the heart-wrenching images of religious Jews dutifully going around after a terrorist bombing, scraping up pieces of flesh and blood for burial.

I didn't appreciate the references to mentally disabled people as "retard" in the movie. And, mind you, not one reference but a running tirade.

I left the room not to return to watch it when the nonsense started. I was warned about this but forgot about it when my dh had brought it home.

It's awful that people limit themselves and their talent to nonsense, when they could really do a great job with a hundred different modes of humor.

Pity, because I really like Jack Black, Downey Jr. and Ben Stiller. This movie could have been REALLY Funny.

I don't like war movies ("Pearl Harbour" was an exception)so I won't be seeing this one anyway. But I agree with you about taking God's name in vain. People think the "f" word is the worst, but God's name used irreverently is lots worse. That's one thing I wouldn't put up with from my kids. They are 30-something now, but they still don't say God or Jesus' name in vain (at least around me; I'd like to think they don't do it elsewhere!)
We could learn something from the Jews' treatment of the dead. Of course as a society we have little reverence for the body when alive, so it's not surprising that not much respect is shown for the dead.