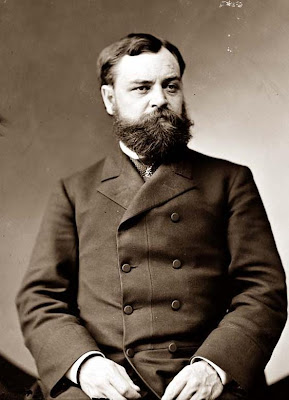 Robert Todd Lincoln, the son of President Abraham Lincoln, has the distinction of being the only person to be present or at least close to three Presidential assassinations. He was a witness to not only the death of President Lincoln, but he was present at the assassinations of President Garfield and President McKinley. According to legend, he was so shaken by the assassination of President McKinley that he refused to attend any more public functions for fear that he would witness yet another Presidential assassination!Of course the most famous assassination to which Robert Todd Lincoln was connected was to that of his father, President Abraham Lincoln. On that fateful day, Robert had just arrived in Washington after serving as an aid to General Grant. His parents invited him to go to the theatre with them, but he declined. He was tired and wanted to get a good night's sleep. He did not get a good night's sleep, however, because he was awakened with news that his father had been shot. He rushed to Lincoln's deathbed and stayed there until Lincoln died the next day. Robert blamed himself for what had happened. Understandably, he wondered how things might have been different if he had been there. Could he have stopped Booth? That was a question that haunted him for the rest of his life.In 1881, Robert was the Secretary of War for President James Garfield. At the President's request, Robert planned to travel with the President to Elberon, New Jersey. Unfortunately, he was late at arriving at the train station in Washington. Just as Robert arrived at the station, President Garfield was shot by Charles Guiteau. While we do not know for sure where Robert was during the assassination, it is likely that he was an eyewitness to it. At the very least, he was present and heard the fatal gunshot.

In 1901, Robert was the President of the Pullman Car Association when President McKinley invited him to attend the Pan American Exposition in Buffalo, New York. Robert arrived late, and was on his way to greet the President when Leon Czolgosz shot and mortally wounded McKinley. Robert was most likely not yet near the President when the assassination occurred, but he was at the Exposition and probably heard the gunshots.There are some who say that President Garfield and President McKinley had started having the same sort of prophetic dreams about their deaths that had haunted President Lincoln before his assassination and that both men had requested the presence of Robert Todd because they wanted to discuss his father's dreams. Whatever the case, Robert Todd was invited to the scenes of three Presidential Assassinations and was one of the closest witnesses to all three. It is little wonder that he began to feel that it was more than just coincidence and that he needed to stay away to keep his bad luck away from the President!


*Mr. Obama, I would re-think that Caroline Kennedy appointment. In fact I would avoid her like the plague. History is freaky, it tends to repeat -ya know.
Posted by belinda at 3:41 PM

I heard that Caroline was the cover girl recently for AARP Magazine. Which freaks me out; because she is freeze-framed in my mind as the little girl I saw on our black-and-white t.v., standing with Jackie, watching her father's casket go by.