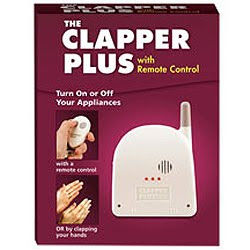 My children are beginning to summit their Christmas wish lists to me and Kate has told me that she wants a snuggie and a remote control clapper called "The clapper plus ." As it stands now , we can hear her clapping endlessly in her room with last Christmas's hit item - the regular "Clapper", sure it's much easier to flip the switch , but that's just not as cool . The funny thing is that the light switch is on her night stand which is only 4 inches away from her head. She said , "I don't feel like clapping anymore." Now in her defence she does have to clap at least a dozen times before it works for her, but with the Clapper plus she will have to hunt for the remote control which she told me that she plans on carrying in her book bag so that she can show her friends however most of her friends drive cars so they wont be impressed,
but she doesn't know that yet.
You know where to buy the clapper plus don't you? It's at Walgreen's next to the bed pans and the "Depends".
Posted by belinda at 9:15 PM

Labels: Please God connect the neurons in peoples heads., You crack me up