A paragraph in Craig Ferguson's book makes me wonder. 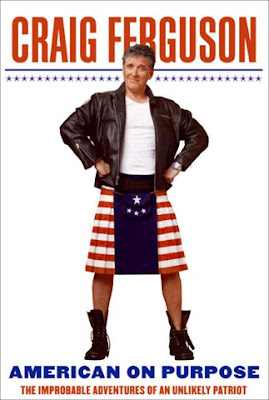 Craig wrote about a correspondents dinner that he had been invited to host when Richard Wolfe came up to him and assured Craig that Barack Obama would be the next president of the United States. Craig continues... "This still amazes me because at that point he (Obama) didn't even have the democratic nomination."
*Personally I think this stuff has already been decided for us and long in advance.
I hope and pray that I'm wrong.
Posted by belinda at 8:29 PM

Labels: Dear God get me outta here but pick someone else first

I bought this book for Lazlo this Christmas. (Lazlo became an American on Purpose this past December!)

Well, haven't read it yet and now I must! (I saw him interviewed on Larry King and he left King speechless! Something about what you wear under a kilt.)

He has an uncanny ablity to 'pick the winner' in elections.

He knew that Barak Obama was 'somebody' when I got all enthusiastic (I KNOW!) about him at the Democratic Convention back in 2004. He KNEW something was up with the guy then. And, he says he's been planning his run for YEARS. That's why there isn't any real "paper" trail of his work or life. No books except for the "Father" book.


Also, he was sure W was going to be up for the Presidential election in the mid nineties when he saw him interviewed with George Sr. A few years before the Presidential run. I told him "No way!"

Also, sometimes the people do chose. That's why it surprised so many around the world when Bush won a second term. Even I was surprsed, and I voted for him.

Right now Lazlo doesn't see a Repulican winner in his sights. (Although he seems to think Romney is okay. Don't even ask him about Palin. Plenty smart, but just don't ask.)

Politicians have to have that "IT" quality.

He also said McCain had no real chance of winning. No Republican could have won, because of the mass manufactured Hate of Bush.

I should ask him to write something up for the 2010 election.

BTW he's not impressed with MA's MS. Coakley. At All.

Our sweet Lord was born into a world where Pagans and Murderers were in political power. Maybe we ask too much for anything better.

No matter what, we must pray for our leaders.