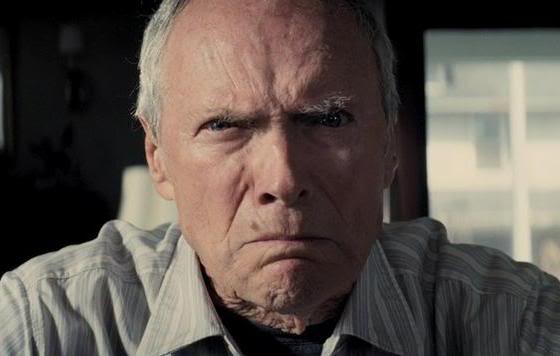 Dear Mr.Eastwood,
I loved your movie "Grand Torinio" except for the God's name in vain parts which I actually find super offensive but the cussing otherwise doesn't bother me - even though it should, as I was raised by a couple of sailors on shore leave. ;)   I loved it when the main character of Grand Torinio died for another person in the end. I also liked how your character created his own family because the one he had was all losery and plus I have a fondness for grumpy people- I like to irritate them until they growl which made your movie all the sweeter, and so because I loved Grand Torinio I took my activity director to see your new movie "Here After."

I'm a little religious freaky in real life so I figured, "Me and the "Here after", hum, probably a good fit!"  So as I nestled into my comfy  red faux leatherette chair without the bed bugs (I checked first)  I noticed a woman who goes to Mass with my activity director and myself and I thought ,  "I should try harder to he a better christian and not ignore her", so  I said, "Hi" to which she replied, "Can I sit with you?  I said, "Ummmmmm, SURE! (I'm hesitant about everything in real life because I have to think things through as I pondered if perhaps this could be a problem for me in some way but I failed to recognize a downside but then I worried that at the very least I would have to chit- chat. (OMGosh - the dreaded chit- chat, but I decided in an instant that I would offer it up - for Jesus:)
This nice woman chit- chatted like crazy so I missed most all of the cool new movie previews but then she finally settled down  when movie began.  I loved how "Here After" started. It was terrifying and super well done. I didn't like much else about the movie and  I thought, as usual the Christians  were  depicted as idiots and although I know a few Christians who actually are idiots we were depicted in an unflattering way which is misleading as there are many Christians who set the gold standard for the rest of humanity to emulate. I wondered why the psychic in your movie had all of the answers and respectability but the Christian didn't?
The movie was slow and I had to assure my activity director that in the end you would pull the story line  together but he became bored. (I also  had trouble keeping  him engaged while watching "The American" with George Clooney but George cheated by throwing naked women into the story line when the dialogue tanked -just for good measure but you didn't sink to George's level- good job!)  During the last scene the  woman sitting next to me begins to cry and all I could think about was , "It's just not that sad!" and "Please dear God, I hate snot and drool." Please, please, Lord,  keep me cootie free as I hoped she brought a Kleenex. Geese, I hate O.C.D. -and snot.
*****
Anyway, I wanted to share with you and your movie goers  what God has told us about consulting psychics as I've  noticed that this stuff is very popular now days.

*****
"Give no regard to mediums and familiar spirits; do not seek after them, to be defiled by them: I am the LORD your God" (Leviticus 19:31).
"And the person who turns to mediums and familiar spirits, to prostitute himself with them, I will set My face against that person and cut him off from his people" (20:6).
"There shall not be found among you anyone who makes his son or his daughter pass through the fire, or one who practices witchcraft, or a soothsayer, or one who interprets omens, or a sorcerer, or one who conjures spells, or a medium, or a spiritist, or one who calls up the dead. For all who do these things are an abomination to the LORD, and because of these abominations the LORD your God drives them out from before you" (Deuteronomy 18:10-12). The original King James Version renders "medium" as "consulter with familiar spirits."
*****
Even though I hadn't seen anything much after "The outlaw Josey Wales" I will probably go and see your next movie but please don't encourage us to sin. I have enough trouble on my own and without anyone giving me any new ideas.
Posted by belinda at 10:08 AM

Labels: Do you have battle fatigue you appear to be losing., I can't go to hell when I die because I have a lot of potential, It's just not that complicated., P.aul M.ust S.uffer., You crack me up

Mr. Eastwood needs to step aside and not make any more movies. Sheesh.

This week a wonderful four plex movie theater was torn down for further development. I went to the movies there with my church group from back home to see the showing of "The Greatest Story Ever Told." That was opening week of the place. Now it will become a new condominium development. Sigh.

Well, this is a letdown, indeed! Gran Torino had technical flaws, but the main story got a lot of stuff right. This one doesn't sound very promising at all.

Thanks for the review, Belinda!

It was about dying to self and it posed the question "What makes a family? -The neighbors who love and care about you or your losery child who only loves you for your things? I thought the movie had a good message and there are few good messages to be found on television, radio or in print media. The real world is rarely challenged to growth spiritually from any of these mediums. I warn you though the language was terrible in G.torino.

I'm not much of a movie fan anyway but my mother is and so is one of my grown daughters- who is making two movies right now and I'll be livid if my kid makes movies which cause others to sin. Livid.

I wasn't planning on seeing "Hereafter" and your review removes any chance of me ever seeing it.

Hie movie "Million Dollar Baby" advocated euthanasia (or maybe it was mercy killing) in some fashion. Seems like Mr Eastwood is dealing with some End Of Life issues in his movies. I think we should pray for him to find peace. I wonder if he's suffering, or fearing death.

I will pray for him as you recomended.