Hey little bro, stop hogging all of the Catholicism for yourself and save some for the rest of us. 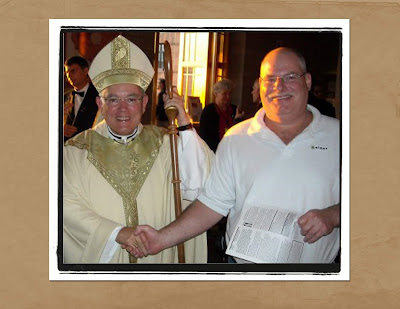 You know there are poor children in China that never get to have any Catholicism.
*************
Since my brother Bill has became a Catholic ( a mere 15 months ago) he's been devouring everything in that Catholic cafeteria we've all heard so much about.
He eats and breathes everything Catholic -even the vegetables
(it's okay, nobody wants those anyway).
We've all heard about those picky eaters but he's not leaving anything
behind for the rest of us.
Bill has joined a scripture study group and he's going
with a group of friends to Lourdes in a few months.
He's also joined the Knight of Columbus and has
enjoyed riding his motorcycle with his priest and their friends in a Catholic bike club.
(Bill, you gotta have a big bad name for your bike club)
I can't remember all of the things that he's involved with
but I really am very proud of him.
In a week or so he has a class with Archbishop Chaput !
Save some Catholicism for me! I want some too!!
Posted by belinda at 11:33 AM

Labels: Christ renews broken lives and hurting people., Pick up your cross and quit your twitch'in

What a cool brother you have, Belinda! (Just tell everyone he learned it all from you . . .)

And a priest in a bike club? That's bad-ass, if I may say so in your ladylike corner of cyberspace!

Now that my brother has finally found happiness after all of these years, I doubt that he would easily give up his faith for anything or anybody.

Don't forget about the children starving for Catholicism in the US. You don't know they're out there because their families don't go to church anymore. I know. I was one of them.

Miss Nan, yes it's true many Catholics don't even go to Mass but often religious (catechism books) studies for children have become so watered down, candy coated, and over processed to the point of lacking in real nutrition. It's become like junk food - empty.

A great Catholic teacher (we've had some) can enrich the meal and make it more sustainable even with lousy books that school officials pick out.

Of course I'm not talking about the Eucharist.
He's perfect sustenance.