My son has the analytical brainpower of a rocket scientist - three months
in utero. He told me his life's ambition is to live alone in the forest avoiding people, particularly girls like his sisters - Much like a Sasquatch.
So is it any wonder he said to me, "Mom, I know something that would be really funny, I will lay down on the railroad tracks and I want you take my picture, okay?!"  I said, "Yeah, sure, that would be hilarious," "And  I'll bet social services would  find my top notch parenting skills amusing!" 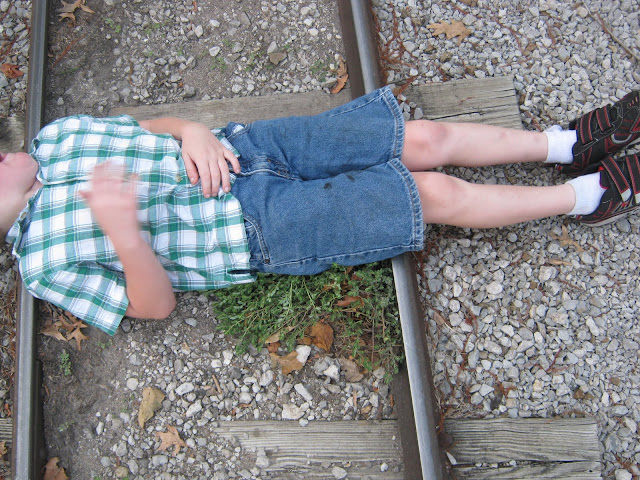 *Disclaimer- The zoo train had quit running for the day and was parked in the garage but when the conductor was putting it away for the evening, I laughed and said, "It sounds like a lawn mower engine, hahahaha." However my son didn't appreciate the passive aggressive comment about the train lacking speed and power and had he remained on the track at that time, he may have encountered some serious bruising.
Posted by belinda at 12:27 PM

Labels: beat it kid your bothering me, I age disproportionately faster than you cause I have more kids., Keeping it real yet always dramatic, YOU DID WHAT?

What a Calvin! Hopefully, child protection will not trace this photo! :-)