My own "personal hell." 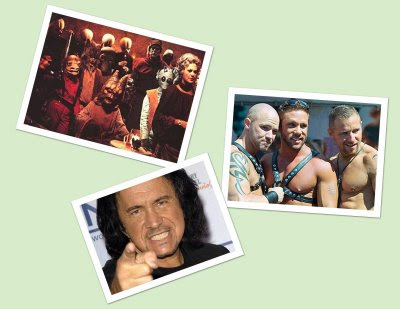 I was thinking about what hell might be like for me ,
and here are my conclusions.......
My hell would look like the bar scene from "Star Wars".
I hate science fiction, so Gene Roddenberry would be my door greeter- if Mr. Roddenberry went to heaven , - worse yet , it would then be Gene Simmons from KISS greeting me.
I would be naked , and there would be tiny "LEGO'S everywhere
(they hurt like hell when you step on them) ,and because I have social anxiety, I would be required to give speeches adding to my sufferings , and the suffering souls around me.
Those Folsom street fair boys would be there with their leather items, only they wouldn't be gay anymore, ( here, their personal hell intertwines with mine.)
There would be mountains of laundry, with no washing machines,
and the little demons would demand that I launder their favorite blue shirts,
but imagine my horror when I notice that the blue shirt that they want is on the bottom of the blue -laundry mountain.
I would be required to "sew" stuff. using complicated patterns , that read.... Place piece "A" together with piece "C" only after you sew piece "A", and "D" together , but not before you place piece"B" on the fold of piece "D" but not before you cut ,and sew pieces "A" ,and "e" on the fold , with the nap...... Nap?? yeah, I wanna nap. (You get the picture)
Nothing would fit together , not patterns, puzzles, machines, nothing - no order only chaos.
All of Satan's photos would be hung crooked ,and must continually be re-aliened.
My O.C.D. would kill me.The little devils would leave their candy wrappers everywhere, and their underwear too, and I will also have to clean their dirty dishes, but only after I hunt for them in the garage, yard, and bathrooms. (I know, who eats in the bathroom?)The little boy demons never - EVER hit the water when they go, so I would be cleaning that up- say 6 times a day . (just like home)
My set of "view-master" reels would be damaged from the "hell fires" smoke, causing me to have to re list them on E-Bay ,and noting -"Comes from a smokers home"-there by depreciating their value drastically .My reels would have missing frames too , and the reels that I would be forced to view would be the porn reels that I have complained about to the sellers over on EBay.
These same sellers would then feel that "it's payback time".
I would be required to balance my checkbook, and I could no longer "take the bank's word for it", and it would never balance . There would be huge sums of money in the account , because they know that I don't really need it then.
My yard would look like hell, and nothing would grow for me. (Just like now)
In Hell , I would receive letters in the mail, that read- "Warning" , from the Office of the Commissioner, from the Kansas department of education concerning one of your children.
I would get phone calls from people who say "Is this Belinda ?", I say "yeah" , and he says's "this is officer Meyers ,and your kids have just been in a car accident." (someone just kill me - Again)
I would get terrible calls from the hospital too- about test results , or worse yet , they would say
"you better get down here!"
But my two greatest sufferings in hell would be my separation from God who had created me for himself . Both God , and I would be heartbroken- forever,
and secondly If I saw anyone of my children, husband or family members there in hell with me ,
then I would just want to die. Again, and Again.
Go to Mass, Go to confession, say your prayers, do what God calls you to do today , don't wait .
Your running out of time.
*public disclaimer, I am not judging where other souls will go when they die. I don't have a clue.
Posted by belinda at 8:48 AM

I love it, Belinda. If that doesn't scare us into going to confession, nothing will!

Your personal version of hell is scary enough to send me back to confession. But I'm going to the Spanish priest, even tho he doesn't understand me so well, he never lets me off easy.

I agree Legos, even the Duplos hurt like hell if you step on them.

Talk more about your ocd. I think I might have it. If you have any good books on the topic I'd love to know.

God Bless Belinda, her family and her brain!