Last night I dreamt that I was at a party at Sammy Davis Jr's home. (That's right, THE Sammy Davis Jr.)His house was in disarray as he was having trouble getting his house in order (I saw it literally but it was meant in a spiritual kind of way.) and there were people behind us who were working to help him sort out his things from his life. Sammy was wearing a white suit and he walked up to me and said, "Would you please pray for me?"  I said, "Sure I'll pray for you." and then  I saw what it was he wanted me to pray about. This photo pretty much sums it up.
I offered up a rosary and my attendance at Mass for him.
*** 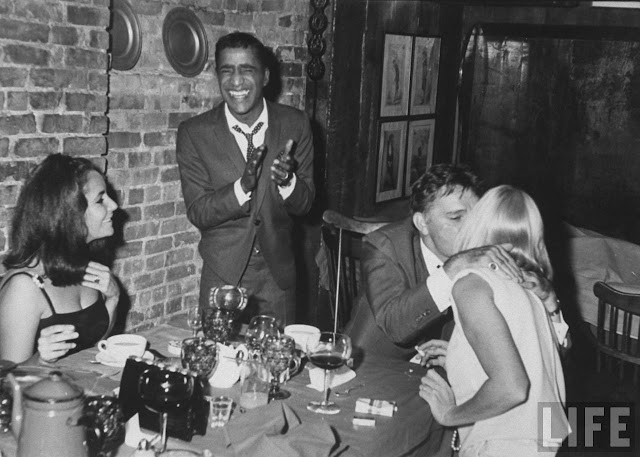 "I wished I would have asked Sammy to "will" to me his groove thang, since he probably isn't using it anymore but I've since reconsidered after "googling" him.
*You may be wondering if I just saw something to remind me of him before I fell asleep but no there hadn't been. I watched the "Civil war" brought to you by Ken Burns.(And  I'm praying Ken does a re-make.)
*My blog administrator said, "I wouldn't even tell people about the dream." But I think, "So what, I'm not hurting anyone and I'm the only one who looks like a fool and besides praying for people is a "win- win" for all of us.......... Okay so who's next? Surprise me.

The dream is amazing - so we have to pray for Sammy.

I'm wondering if I'm not praying for people in purgatory.
****
Though his sins were probably no secret in real life I feel an obligation to keep them quiet. It's nauseating to observe though.

When I googled his home (- I swear to you) I dreamt of the same place. It gave me chills.
****
I may be a joke, and the dreams may be a joke but these prayers are very real.

****
I don't know enough things about being Catholic. I don't know enough of the "legal stuff- and the cool stuff" but I do know enough to love greatly and pray hard and though I feel a hole where knowledge should be, I have to let it all go and work with the gifts and talents that God gave to me.

Whatever though, I'm still pulling up the real in Catholicism - and I believe your blog to be converting souls to Christ.

I found out last week that PTO presidents have to do some public speaking! NO WAY!

God is pushing me and he's gonna break me for sure but I think that's the point.