Two days ago, I said to my blog administrator, "Ya know,....... the stick that you just threw into the fire pit, along with the last one, was poison ivy?" (As he ignored me and projected silent mockery which  could   be recognized with an eye stare / glare and an ever so slight change in his breathing pattern.)
This morning he looks like a one eyed puffer fish  only he lacks the same kind of excitement and amusement of a puffer fish 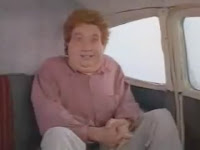 and with extensive redness and swelling around his eyes and arms, his general personality has, well frankly - tanked.  I put Ivy itch medicine on his boo-boos and he practically cried in response and as I blew on the stinging patches of magenta skin -which are now spreading quicker than  Muslims in France, it was then that I reminded him of the time - when I was giving birth to one of his little stressors, who can't seem to consume enough food  angels and he said to me, "Awww, come on Belinda, it doesn't hurt that much!"
We would have remained childless if he'd a been the one asked to push a watermelon through HIS nose.

Don't feel too sorry for my administrator,  he's a better person than I am and everyone knows it.
I will make him some "Jello" or homemade chocolate pudding today. That will fix everything.
Posted by belinda at 8:01 AM

Labels: Do you have battle fatigue you appear to be losing., Halloween, P.aul M.ust S.uffer., Your not that funny

Oy! Talk about mortification for Lent.
Maybe some Benedryl? It would at least let him get some sleep.
Poor guy.

The Learned Astronomer does not do colds well. Being a scientist, he is obsessed with data and insists on taking his temperature every hour or so. I once was moved to throw away all the thermometers in the house.
This is probably not how St Therese
would've handled the situation.
I have a ways to go.

menfolks want to be babied when they're ill...for me I want to find the deepest darkest hole and hide...just as long as it's within running distance to the bathroom. My black kitty will join me in the bathroom for moral support.lol

Now he's sick and all he wants to do is have me hold him...poor baby.