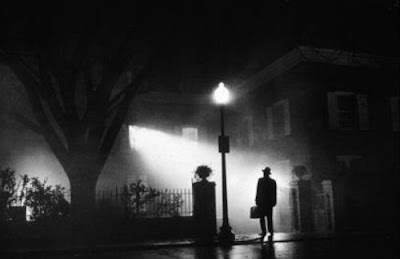 William Blatty, author of the 1970's light hearted flick, "The Exorcist," has filed a lawsuit against Georgetown, a Jesuit run university because of their "Persistent scandals to the laity." (Who could we presume will give Mr.Blatty more legal headaches, Satan or the dissenting Jesuits? I predict it will be the Jesuits because Satan can be cast out in Jesus' name.) If the university loses this battle to Mr.Blatty, they will lose the right to call themselves a Catholic institution, no matter though, we're simply playing a game of semantics's, Georgetown has already lost their Catholic identity a while back and apparently when no one was looking. Anybody care for some pea soup?
Source
Posted by belinda at 7:03 PM

I almost quit breathing when I was reading this post! Bravo Belinda!

Everything will be fine, I remember my CPR class. Whew!