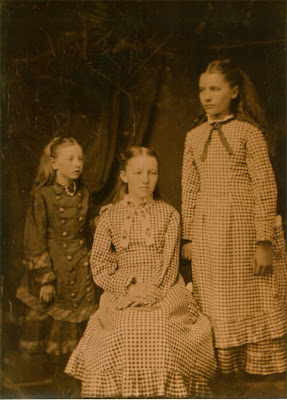 Carrie is on the left. Mary was seated, and Laura stood on the right.
At the age of fourteen, Mary suffered from scarlet fever, and became blind.
Between 1881 and 1889, she attended the Iowa College for the Blind at Vinton, Iowa. She finished the seven year course of study in 1889 and graduated. Then she returned home to De Smet, South Dakota and lived with her parents until their deaths. Later, she lived with her sister, Grace, and then Carrie. She never married, nor did she become a teacher of the blind. She died on October 20, 1928 at the age of 63, as a result of pneumonia and complications from a stroke.
http://en.wikipedia.org/wiki/Mary_Ingalls

*What caught my eye was how Laura held herself. She didn't appear to be very comfortable.
I have often wondered what she was thinking about at the time of this photo.....

I will pray for your souls today. If you made it to heaven , then will you please pray for mine.
Posted by belinda at 11:32 AM

I loved the Little House stories when I was a kid. I used to listen to my great-grandmother's stories of her life on the prairie; their lives were a lot like the Ingalls.
Mary probably looks uncomfortable because of the long exposure times of photography in that era; it wasn't a very spontaneous process. (I was going to also say that the flash was momentarily blinding, but that wouldn't have made any difference to her.)

Oops, my bad. You said Laura, rather than Mary, was looking uncomfortable.

Laura looked stiff ,and uncomfortable to me - like she wanted to bolt or something. Maybe she had anxiety. Maybe she was angry or upset about something. - I can't imagine living on the Kansas plains -the anxiety , and fear of trying to sleep or work with indians beating on their drums,or maybe watching you. The Kansas weather can be so wicked, and on the prairie there are no windbreaks. I have decided that it's only by the grace ,and will of God that humans have survived at all.
We couldn't have done it alone.