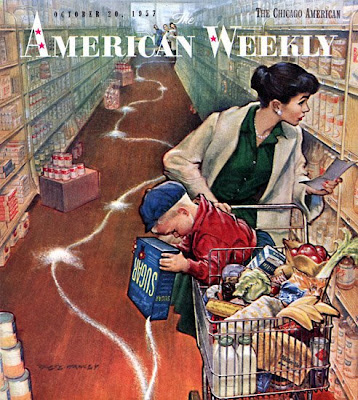 I hate taking Joseph shopping. It's the worst. Oh it was fun ,and pleasurable when I carried him in his baby snugly on my tummy- years ago, he loved it too, but then when he got bigger I would tie him onto my back. That was fine until he got even bigger, and could walk, and then run. You know you can't slap your child in public , or ever really ,and I think that's a good thing , but what's a parent to do? I do spank my children , but rarely -Paul doesn't spank them at all, because the children listen to Paul ,and they don't want to disappoint him. With me they couldn't care less. I have found that one well placed spank is enough, but not in public because S.R.S . would be my door greeters when I got home. In public stores my solution is to have Joseph sit in front of the "Revlon" , or "Maybellene" make up display wall. He hates that! That just kills him even though he has begged me many times to put makeup on him in the past , by me creating some sort of fake facial hair or "fire fighter" soot smudges on his face, all very manly stuff of course- but it's still makeup.
I often wonder why God has given me so many children. I am not good enough for them. I have trouble meeting all of their emotional, and intellectual needs. I try so hard though. I am not worthy of these awesome people, and I will be held accountable for all of it, by God himself . What were you thinking God? Sometimes they overwhelm me. One of the times when I have real trouble parenting is when one of them tells me to "shut up". Something freaky happens to me - my eyes roll into the back of my head ,and I begin to speak in tongues, then I shake a little, and then I go blank . I can't remember much else after this occurs. :)

Labels: Belinda does Passive Aggressive, Dear Jesus, I age disproportionaly faster than you cause I have more kids., People Belinda likes. Paul suffers.