Here I am Lord. 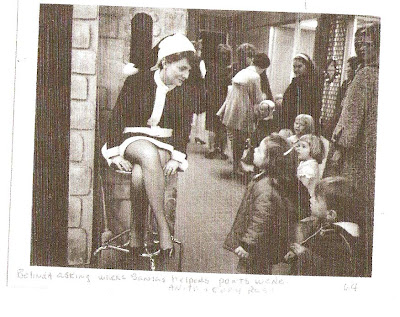 Here I am questioning- interrogating, Santa's assistant asking her,
"where are your pants!"
( Those were fishnet stockings that she was wearing.)
I 'm sure she was delighted to hear that question since her Mother probably asked her the same thing before she left for work.
I have always been some sort of a self appointed "religious policeman". I was born old, and Conservative. I don't know why. I can't conform, and I has caused me great pain. I really don't like that about myself , but it's just who I am. I think that at some point it will lead to my demise, because someday I will ask the wrong questions of the wrong person, but because I can't seem to change the fundamental person of who I am way down deep inside , well then I am just stuck.
My parents didn't know what to do with me either. They were very liberal 1960's kind of folk, and I just never matched up with the rest of the family. I really was a genetic fluke of nature, and miserable.

What were you thinking God? "Why should I care who goes to hell." "It really is your problem after all isn't it?" "Am I my brothers keeper?" Besides there are far better spokesman than I am . Faaar better. I keep thinking that if you want em Lord, then you go get them. Maybe I should just live my life with my head down, and my mouth shut. Yeah , that's the new plan.
*Note the lady smirking on the far right. I do remember the giggles, Although I don't remember our "hot" helpers response.
Posted by belinda at 8:34 AM

Cute post, Belinda, appropriate for Sunday's Mass readings. This is my first time going to your blog. I've seen you in Terry's commentary boxes for months (years?) now, but I didn't get the memo that you started your own blog.

I just want to say that I LOVE the map of your brain! What a crack-up! I need to map my brain, so when I lose all my marbles, they'll have a guide to follow for when they put them back! Also, great selection of paintings/icons of the Saints that you have on the sidebar.

Georgette , thanks for the love, I'm feeling a bit down today. My daughter called me a "freak" yesterday.(among other things)

And then there was an "atomic" explosion inside of my brain. I haven't fully recovered.
The teen however is doing fine bouncing around the house like nothing ever happened.
************************

I love the picture, you were a cute kid!

You were very sweet!

My dd at four couldn't help but point out people who were 'naked' out in public. Like the lady in super short cut-offs and bra-style top in the dairy department at the Winn Dixie. "Mommy, why is that lady naked?" In a clear sweet voice. The "lady" grabbed her carton of milk and ran.