It was my brother in laws birthday and he decided to take his wife, my activity director and myself, to Knuckleheads, a night club in Kansas City Missouri. 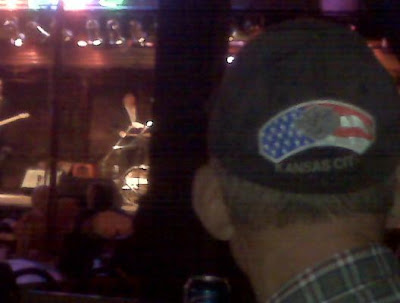 My brother in law seated me directly behind an older man who was sitting next to a pole nearly the width of the mans head. The three people in my party could see just fine, I on the other hand could not and as we watched the musicians portraying Buddy Holly and the crickets revving up the crowd, the old man decided to get up and get himself another beer but not before he wisely left his jacket on the back of the chair to save his spot. I spontaneously decided to move his chair three little inches to the right and when the old man returned with his tall boy beer, he noticed nothing. I said to my activity director, "When he drinks himself under the table, I will be able to see."
After about 15 minutes the old man got up to get another beer and so again I moved his chair three inches to the right and after doing this for the forth or fifth time, the old man found himself squarely seated behind the pole and straining to see around it.  He struggled to move his chair but the floor was uneven and one of the legs kept snagging on the uneven concrete cracks in the floor and because he appeared too drunk to figure out this simple equation, he simply sat behind the pole staring at it for a few minutes, then he picked up his coat and stammered away.
I  moved up to the seat next to the mans chair as my activity director sat directly in the newly vacated chair and  I looked at my activity director and laughed as I said to him , "Good thing the  man wasn't incontinent," "You checked first right?"

My bad,  as defined by the Urban dictionary;
Moronic phrase used by pretentious, clueless twats to acknowledge they have made an error.
Example; I forgot to remove the safety catch before putting the gun against my own dumb head and pulling the trigger. My bad

Labels: "Crazy"- isn't a new idea, beat it kid your bothering me, feelmypain, Friends who we love, P.aul M.ust S.uffer.

Hi Joe, I'm trying to post more but I'm overwhelmed with my day to day responsibilities. I need one of those bumper stickers that read, "I'd rather be blogging."

Thank you for your kind words.
****
About this post,I feel my behavior was rude and if this situation should ever present it's self to me again, I will sit and offer up any inconveniences and play nice with others. I did pray that the old man got home safely.

You are so funny - I love it. So how old was old man? I don't think you were rude at all - you were looking out for your party. The guy wasn't aware of it anyway. No harm done.

BTW - The Kansas skyline is beautiful. You are so blessed.

Mr.T, I've been blessed beyond my wildest dreams and even including the times when I've suffered. That's when I learned the most and grew in Christ the most.