I don't know what Satan looks like to other people but when I've see him he looks like a regular person except that there's always something about him that isn't quite  right. His eyes and hair look a little bit like Neil Diamond but I'm pretty sure that Mr.Diamond isn't the devil - though I am speculating. 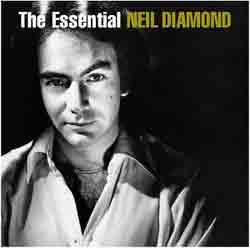 The times when I've seen the devil I've had a feeling of dread followed by high anxiety and unlike Neil, most often he appears disheveled in one way or another as I once saw him mocking a  woman by pretending to be pregnant and Holy with  strange messed up hair and with a wicked look on his face. Eh, that's probably his standard look though. The the hate which came from him was palpable and terrifying. It was something I couldn't understand because after all what did I ever do to deserve such hate? I just can't comprehend it.
**************************************
Late last night I dreamt that Satan threw a Hostess chocolate zinger cake on the ground in front of me and said in a monotone voice, as if he were commanding a dog, "Go get it."  And as I stood there and stared at him,  I understood that he was making fun of me. He was saying that it takes so very little to distract me from Christ. This act made me feel weak and stupid. He was telling me with out saying anything else that whenever he feels as though I'm bothering him or when I'm some sort of  minor threat, there's never really a battle between us, he simply gets me to stop annoying him by  throwing food my way and because I feel  that processed chocolate zingers are at the very bottom of the food chain, he was insinuating that it doesn't take much to distract me, or lure me away from Christ. So this little visit was a triple insult. Naturally he hurt my feelings but of course that WAS the point.
I suppose it only hurt my feelings because it's true. I AM weak, small and not so bright but the thought of my behavior causing Christ to be disappointed in me brings me to tears.  When I remember my weaknesses I also remember that it's Christ who strengthens me and in my humility and smallness Christ fills me with himself. Being stupid is only temporary and I'm okay with that but I can't live with the thought of Christ being saddened or disappointed in me.
I will continue to offer myself and my work to Christ as a living sacrifice and even if my work and I are completely worthless. I'm going to try to not dwell on these things and even though they make me sad, I get how this stuff works.
**************
What does Satan send into your life to detain, distract, or delay you from either Christ or from the work which Christ has given to you?  I pray, you are all better Christians than I am, my dear blogger buddies.
**************
My penance after confession was to contemplate how much Christ loves me for five minutes. This was the most difficult penance I think I've ever done and poorly at that.
***************
Lastly, I'm so very sorry for not blogging more but I'm our Catholic schools PTO president and I'm practically living at school now. I sincerely miss all of you.
Posted by belinda at 10:51 PM

Labels: "Crazy"- isn't a new idea, beat it kid your bothering me, Catholicism or nothing, Christ renews broken lives and hurting people., Divine Mercy trumps all

I am happy to see that you are simply busy. Now Pablo and I can stop worrying about you. :)

I'm so sorry to have worried you. I would rather be cloistered and blog with all of you than to do what I'm doing now, but God has shoved me out the door.

I didn't think anyone would miss me though. It's nice that you and Pablo did.

Satan was asked why he could not get a certain young girl for a man that had sold his soul to him.

The Devil finally admitted the girl had the protection of "That Woman" and also wore her likeness at her breast.

Upon seeing the Miraculous Medal upon her chest, the man converted and became one of the Saints.

The Devil might throw a doughnut at you, but you have the Dispenser of Divine Graces, the little girl that smashed his head, no problemo, on your side.

I suggest you get yourself a Virgin Mary medal.

I am happy to know you are well.

I do wear that medal. Food is my weakness and that was my point. I desire very much to conquer this but I can't do it without Christ. It really does make me feel weak, small and a disappointment to Jesus.

I trust that he will give me the graces necessary to stop using food as comfort. I hate this about myself.

Too bad he did not have the courage to stand up to those child molesters and perverts.

Move on, no Martyrs here.

Speaking of real Martyrs, we've got lots of them waiting in the wings for their cue from God. I believe that many of them aren't even aware of their calling yet.

Martyrdom is so spur of the moment. It's an instant revelation to the rest of us of a person who's love for others is so great that it blocks out any light of the love that they have for themselves.

God bless you for your service to the PTO. Your time in purgatory is probably cut by 80% jsut for that.

I'm so glad you're back!

Dear Miss Lola, I sat in on an additonal board meeting concerning fund raising on Thursday. We are called to raise over 50 thousand dollars in March. I live at my parish now.

I heard a board member say to another member, "Blogging isn't a real relationship." I understand what she was saying, I can't mow a bloggers lawn when they're sick nor can I come over and watch their kids when they're in trouble or hug them when they cry but even so, I was offended because the emotion I feel towards my blogger buddies is as real as any other relationship I've ever had and so were my heartfelt prayers. I'm so glad all of you haven't forgotten me. I have two reports due to the principal - last Wednesday. I'm running as fast as I can!

Except for my husband and children, the people in my day to day life don't know me like my blogger buddies. Not even my parents.

Bloggers know the real me, how I think and feel about things, namely Christ. It's hard to find people who want to live for Christ in the real world as I've been made fun of many times for being too Catholic. Which is okay with me.

food was Eve's weakness also...and actually every womans weakness...sex is mans weakness...Christ will help us carry or cross...as Our Lady of Medjugorje says "pray,pray,pray..."

Stefan, I'm praying as fast as I can.

Thanks for stopping by.