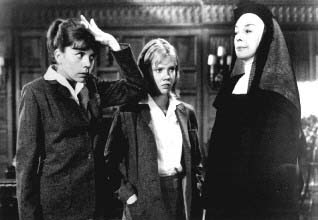 Hypocrites and miscellany
While at the mall, our daughter Kate asked to look around Victoria's Secret as Grace and I followed closely behind her. An employee said to Kate,"Hi, I see you go to St. Anthony's, do you know my friends Kelly and Shawn and do you know the White's, they all go to St. Anthony's?! Meanwhile I'm standing there wondering how this woman could identify my daughter- Sister Mary Grace and her twin sister Kate from St.Anthony's and then to my horror I realized, THEY'RE WEARING THEIR SCHOOL UNIFORMS in this upscale trashy store!
As I laughed at my own hypocrisy, I recalled the time when a friend of mine was nursing her baby on Victoria's plush red couch under a huge poster trimmed with a gold frame of  partially covered lacy breasts while the employees and patrons sneered at her and made sure she felt uncomfortable.
As I reflected on these things, I said to my daughters, "Get those skirts outta this store." Then Sister Mary Grace, who's skirt is worn below her knees said, "I didn't want to go in there anyway but before leaving, I said to my sweet daughter, "Well Grace, I found an item that I thought was pretty AND it was sparkly but it was marked $98.00! Do you know how many items I could buy for that same amount of money at K-Mart in the returned lingerie department after Valentines day!?
Then Grace sneered at me and said, "Your not very funny mom."
*Disclaimer- We don't wear pre-worn underwear. It was a joke, however I do believe that many individuals are more concerned about the quality of their underwear than the quality of those whom they sleep with.
Posted by belinda at 3:55 PM

Labels: "Crazy"- isn't a new idea, beat it kid your bothering me, The devil hides behind the haughty, The magic and awe of a Vulcan nerve pinch

Pablo, I hope the baby Jesus left you something nice under the tree.

What a sweet photo. Is that your family Pablo?