I can appreciate the fact that my new YMCA buddy is a team player, but he's playing for the wrong team.

He was wearing a pentagram and he had the same kinda strange demeanor that
that fun guy Anton La Vey use to have.
You know they have two kind of looks.
The first one is like he's up to no good but it's a secret, just between you and him
and the other look is like he's just lost his leg or his best dog or something.
Maybe that's the same look of someone who wants you to think that they've got their eye on you and you should be afraid, very afraid. 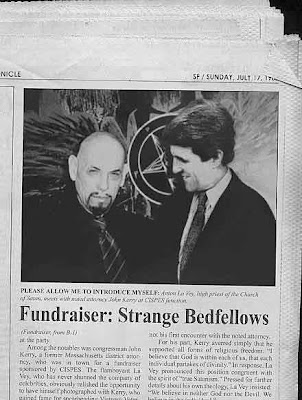 Wiccans and satanists aren't very funny people and neither is John Kerry.
I will try to convert Satan's little buddy covertly but not overtly, then
I will pray for my new"Y" weight mate.

I know Jesus would be thrilled to have these men as converts.
Next time I see the batboy at the "YMCA" I'll tell him that Jesus loves him and
that he should check out my blog.
Here's my blog address. I hope he doesn't kill me.

I need to wear a bigger crucifix.

The guy sounds a little scary, take care, Belinda! I don't understand what turns people on to this type of stuff.

Miss Melody, Please send me your email address I want talk to you for a sec...

Melody, I'll be fine, I will give him Mr.Nelsons address.He will convert the batboy.
hahahaha

It's a sense of power and control. Who doesn't wanna be part of a group of people that do fun and exciting things? hahahaha

It's really the lukewarm people who are the problem. I bet the batboy believes in God. I ran across one wiccin on the net who preached fasting and penance to his people. hahahaha

Maybe the batboy's just mad at God. Immature people blame God for everything. They often lack personal responsibility and cant make the connection that they had brought much of their sorrow upon themselves.

Belinda, my e-mail is
melkat@neb.rr.com

You've got your work cut for you...prayers from us!

Everyone should visit Terry's 'blog at least once! Good luck with your new buddy, Belinda! =)