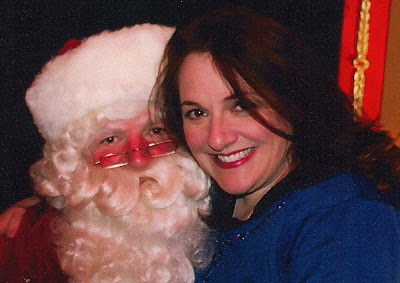 The little elf who was really a troll.
I'm hanging around outside of the ginger bread house where St.Nicholas was entertaining  little angels and as I'm  pulling up the rear in the Santa line, (which I might add ,at one point was as bad as the D.M.V.)    I'm  listening to parents rehearse with their children about what they're  going to say to Santa and what they want for Christmas, when suddenly a crusty old woman wearing an embellished grandma Christmas sweater -a  Elf Nazi, starts yelling at the  parents and their children and says's to all of us, "Santa is done and he isn't seeing anymore children now!"  "It's time for him to go because he has lots of things to do at the North Pole!" ( As I'm thinking ,"Well the laundry is done , he might have a sink full of dishes but they can wait" ;) and so I said to her in my special little way, "No,  he can spend as much time here as he needs to, he really doesn't have anything else he could be doing right now,  he's not  done." Then the grandma elf  became an indignant angrier elf, and said, "OH, YES HE IS!"  "He's tired and he needs to get back to the North Pole!"  "We don't want him to get worn out because he wont want to come back again next year. I said, "No, he can sit there for as long as it takes, it's really no trouble at all,  I know Santa wants to see all of the children in line." I'm positive he does!  (Poor Santa, I didn't even consider that  he might need a bathroom break or perhaps he was hungry,  he rarely complains and besides I had a broken cookie  in my pocket, which for him , always makes everything better!) But the little elf  continued , "SANTA NEEDS TO GET BACK TO THE NORTH POLE! and so  then I put my left arm  around the  antiquated troll, and hugged her tightly so she would feel comfort and restraint which  has always been the method I've  used  for little people who refuse reason. It gives the offender a moment to collect their thoughts , feel security and emotional support and  yet wonder if I'm going to hurt them or not. She replied to me- in her thin, whiny, voice, "We've been here since six o'clock this morning and we're tired and if we push Santa he wont want to come back next year! I said, "I understand,  I'm so sorry,"  And I really was, I don't want anyone to suffer, honestly I don't, but all the while I'm thinking, "Suck it up, - children come first." As I assured her that Santa would - positively be back again next year - I will make him  I promise ;) The woman finally relented and said, "Well, after these kids in line  go through it's over!  No more new kids!" and so I smiled at her, nodded my head and reluctantly agreed.
***
After the last child had left, Santa asked me, "Is the fire truck still out in front and  waiting for me? Have they left without me?  I said, "No, Santa, they're still waiting for you , and I have a broken cookie in my pocket just for you." and my Santa/  blog administrator/ activity director said, "Well nobody threw up, or wet on me this year." I said, "Well that's a - win-win  for both of us!
-You don't think Santa is the one who would  actually have to clean that now do you?
Posted by belinda at 10:56 AM

Oh, I like the idea that you are married to Santa. It's the only one of today's revelations that made any sense.

You are cute as heck in this, by the way. Santa's a lucky guy.

Thank you Julie, but I'm the lucky one, I married a saint - for real.

I don't understand what you meant by "It's the only one of today's revelations that made sense?

Does my blog or post usually sound confusing? I have trouble articulating what I'm thinking sometimes- um , mostly. :)

No, no!
In fact, I was thinking how well-written your post was--like a little short story, really-professional,with a nice little twist at the end! Very " O. Henry".

I just had kind of a bad day and was trying to pretend that I didnt have a bad day, and that opaque personal comment sort of snuck in there somehow.I can see now how it was confusing. I need to keep a tighter rein on those things or actually go back and see if I've made any sense when I write something. Eh... Oh dear. Does that make any sense?

You know I clean bathrooms and kids noses for a living don't you? hahahaha

Sometimes I don't think I make any sense at all by the way my children look at me - all confused and everything.

Belinda, does anyone ever call you Mrs. Claus?

No Melody, but I've been called a Grinch before. :)


Close but no cigar.

Whaaa....sooo...if your blog administrator is really Santa Claus....that makes you.....MRS CLAUS!!!!!!!! I KNEW there was somethin' 'bout you that was familiar!