Since Mike Tyson loves ears, chickens,  pigeons and they seem to have a calming effect on his personality as they bring out his tender- gentler side. 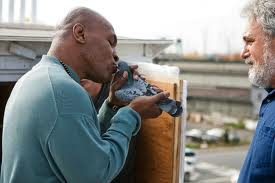 I'm thinking that maybe we could mail a pair of peaceful doves or love birds to Chris Brown, with that  very same intention.
People like me who are quick to anger might want to consider making some meaningful changes with their tempers because your - "I'm sorrys", only go so far and then your sincere remorse becomes worthless to your fellow man - except unto God.
~~~~~~
We may be too late, but has anyone noticed that Mr.Tyson's pigeons don't any have ears?!
And do you think he  understands how many possible contaminants he's exposing himself to by kissing pigeons?
- St.Louis Encephalitis, salmonella, ,candidiaiasis chlamydia psittachi,histoplasmosis, cryptococcosis, bed bugs,chicken mites, yellow meal worms, dental decay, halitosis, E coli  and with one well placed peck he could'a lost an eye!
~~~~~~
My activity director/blog administrator has ordered 24 chicks...... darn!
He must have forgotten about our cats. hehe

Labels: I ate my best friend with fried rice., I can't go to hell when I die because I have a lot of potential, I've been in a bad mood since 1968, pushing God, YOU DID WHAT?, Your not that funny

Um, that raccoon isn't still hanging around your place, is it?
Make sure your chicken run has fencing on the top of it as well.

I'm sure it's better for Mike to kiss the chickens than to bite off ears.

Julie, sorry for my lag time in responding to you. I had to go to work yesterday.

My wager is on the bobcat or the cougar and long before the raccoon even finds out there were chickens in his yard. I also wager that the last chicken will die by Christmas.
__________

Nan, I would have to agree with you but Mike kissing that bird made me cringe! AND on the beak no less!
Seriously, I wouldn't have cringed any more had he kissed the other end. It's all the same difference to me. hahahaha